While the plot of Kiss Kiss Bang Bang – “A murder mystery brings together a private eye, a struggling actress, and a thief masquerading as an actor” – may sound trite and predictable, the movie is in fact a self-referencing masterpiece which turns the hardboiled detective genre on its head.

Starring Robert Downey Jr. who goes from a petty thief to a Hollywood actor and Val Kilmer as a gay Private Investigator, Kiss Kiss Bang Bang is based on the novel by Brett Halliday and adapted for the screen and directed by Shane Black.

The Plot is Almost Beside the Point

As with the novels by Raymond Chandler which undoubtedly inspired the style of the film, the plot of Kiss Kiss Bang Bang is wilfully convoluted, but in the grander scheme of things is largely beside the point.

As Chandler explained in the introduction to his 1950 collection of stories Trouble Is My Business, the moment in the hardboiled detective genre when the sleuth explains who did it and why, was everything and the process of getting to this moment was merely “passagework”. The film follows a similar trajectory, making the plot simply the path to the ‘big reveal’. 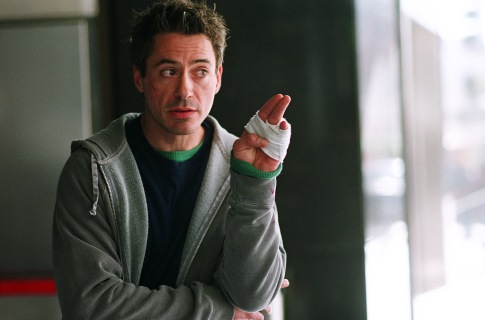 Narrated by Harry Lockhart (Robert Downey Jr.), the film opens with petty thief Lockhart fleeing from the New York City police after a burglary gone wrong and accidently stumbles into an open movie audition – much like how you may have stumbled upon your favourite online betting site.

The directors, mistaking his genuine distress for method acting, cast Lockhart as a star of a cop movie and he is sent to work alongside Perry van Shrike (Val Kilmer), a Private Investigator, to gain insight into his role with a few “detective lessons”. However, their routine stakeout goes horribly wrong when they witness something they should never have seen.

Dubbed affectionately as “Gay Perry”, Val Kilmer’s character takes Lockhart on a routine stakeout which becomes decidedly un-routine upon them witnessing a car being dumped into a lake with a dead woman locked in the trunk.

Meanwhile, Lockhart has met the woman of his dreams – struggling actress Harmony Faith Lane (Michelle Monaghan) – and when her sister goes missing, Lockhart offers his services by pretending to be a Private Investigator. Soon it is discovered that the two cases of the woman in the lake and Harmony’s missing sister are connected.

Of course, we could’ve already guessed that the cases would be connected as Lockhart had already explained to Gay Perry that in hardboiled detective novels – which Kiss Kiss Bang Bang is clearly a charming ode to – that the detective always take on two separate assignments only to discover later they are intertwined.

In fact, the film is absolutely crammed with self-referential gems such as this, but it’s done with such aptitude that at no point does it feel too ironic. Succeeding as both a parody and paragon of its genre, Kiss Kiss Bang Bang is also delightfully noir-ish at times and offers plenty of nods to cultural artifacts.